The throat microphone, also known as a laryngophone, is a type of contact microphone that was first developed for tank operators and pilots in WWII. At its most basic, the throat mic consists of either one or two coin-sized transponders mounted on a strap, a wired connection to a radio or phone, and earphones. The transponder sits on the user’s neck, absorbing the vibrations generated by the larynx and turning them into electronic audio signals, thereby transmitting sound directly from the throat. 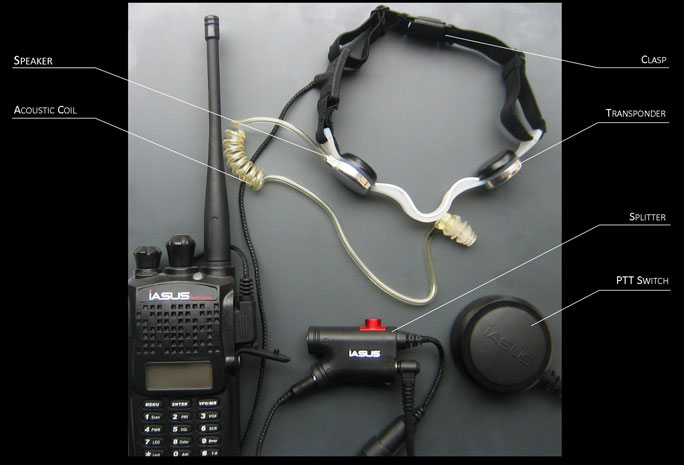 Absorbing vibrations directly from the throat confers a number of advantages over conventional microphones. Boom mics cannot function in high-noise and high-wind environments because they are sensitive to all sounds carried by the air. Throat mics, however, pick up only vibrations from the throat, and are insensitive to background noise and wind turbulence. Depending on the quality of the transponder, a throat mic can also pick up whispers, allowing the wearer to communicate covertly without giving away his or her position. Throat mics have the additional advantage of being non-obstructive. They can be worn with helmets, masks, HAZMAT suits, and full-face breathing apparatuses. Because they do not interfere with the use of other equipment and are highly adaptable to a variety of extreme acoustic environments, throat mics are ideal for a wide variety of tactical and recreational applications.

There are a number of disadvantages as well. Throat mics tend to cost more than conventional microphones. Also, because the transponder rests on the throat, sounds that are naturally generated in the nasal cavity and by the tongue and lips are muffled. In addition, the clarity of the transponder’s transmissions can be affected by the amount of adipose tissue and facial hair on the user’s neck. As a rule, the closer to the center of the throat the transponder is, the louder the transmission will be. Placing the transponder too close to the center, however, will increase muffling. To optimize sound quality and volume, the user should find his or her personal transponder “sweet spot” that balances clarity and volume. The sweet spot is different for everybody but generally located .5’’ to 1’’ from the center of the throat. The user should also be careful to properly tighten the throat strap; if strapped too tightly, the pressure on the transponder from the neck is too great to absorb the vibrations. Wearing the throat mic slightly loose will improve transmissions.

In addition to the quality of the transponder and the radio, users should consider which type of earpiece best suits their operational requirements. Most throat mics use a single-ear silicon acoustic coil to channel sound from the speaker on the neck strap, but there are also models that use helmet speakers, earbuds, and ear-hook earpieces.

Throat mics are often connected to a PTT (push-to-talk) switch that in turn feeds into a two-way radio (in mobile phone versions, the PTT functions as an answer/end call button). The PTT is sometimes preferred by users over the VOX function, since gunfire, coughing, and traffic noise can all be loud enough to trigger accidental transmission, as can a transponder rubbing against the neck. PTT switches come in a variety of shapes and sizes, from tiny in-glove finger PTTs that wrap around the user’s finger to full-surface MOLLE-spec PTTs that can be clipped to a vest. Other PTTs can be strapped to motorcycle handlebars or around the user’s wrist.